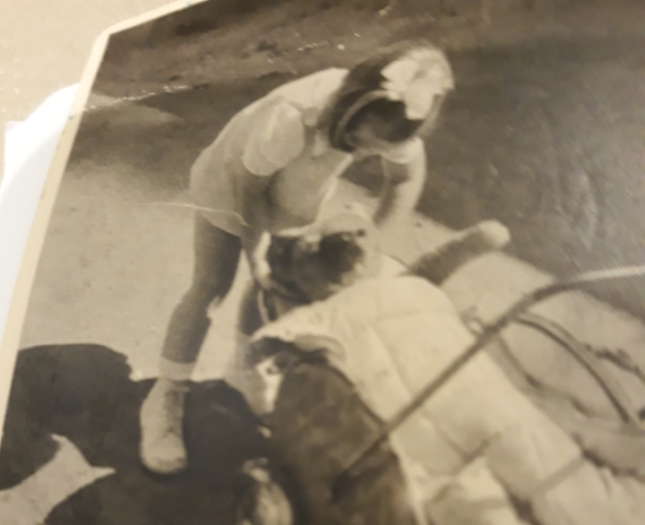 “Don’t tell anyone you paid almost a thousand dollars to repair your bear,” My husband says.

Shrieking sirens. Nervous noise. Bombs. Windows are covered in black. The light turned to darkness. Shattered peace. Mother holding my hand. Me holding my mother’s hand. I think that I am comforting her. With my other hand, I hold Matzi, my bear. He must come with me. Always.

We can’t take the elevator. We ran downstairs with other people. Some give me a smile and pat my head. Some don’t. We are going downstairs to the bunker. Mother tells me we might have to stay there for a while until the noise stops. The bunker is where we all sleep together. It is cozy and a little fun if it weren’t also so scary.

There are always new people coming in, some of them from the street where something must have hurt them because they are bleeding. Mother has one of our white napkins that they used to iron when we were upstairs. She ties it around my temple and with her red lipstick, she paints a cross on it. I like the feel of the coarse, familiar cloth around my head and I like being a “big girl” nurse. Mother lets me go around by myself. I cannot wander too far. We are enclosed. I am three years old and am taking care of the wounded. I make people smile.

My new bed feels hard and strange, so different from the one I used to crawl into upstairs that was soft and smelled safe. I hug Matzi tight. He reminds me of me when I used to be upstairs. 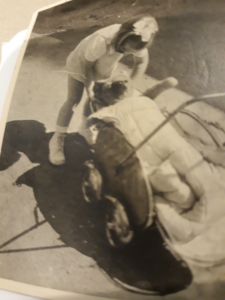 After the war, my bear and I escaped from Hungary together. I was seven years old. Matzi the Bear was six. He was with me when we crossed the dangerous border into Austria. He is stained with my tears from Paris from when we were there together, confused, lost, and missing my mother. I carried him to England. When I had that horrible earache, he was there soothing my pain. Finally, Matzi and I arrived in Canada. I carried him off the train and he was there to witness the greatest disappointment of my life. The woman I had been yearning for, the woman whose memory helped me survive the two impossible years of separation… my mother. She was not there.

No sirens. No bunker. No Mother. No napkins. No visibly wounded. Only familiar feelings for which now, I do have some words. Matzi and I lived by the water. We heard strong noises overhead. They sounded like low-flying planes heading for Manhattan. It’s 9:00 a.m. and the television is on CNN. Matzi was sitting in his rocking chair in the living room with my husband across from him. I was talking on the phone. Before hearing the commotion on the television, I sensed that I needed to get out of bed and go into the living room. I carried the phone into the living room. I couldn’t believe what I was seeing. Then, another plane hit the building.

The smoke. The bodies. The confusion. The fear. The dread. The helplessness. I grabbed Matzi. Something was familiar here, but I wasn’t sure what. From where we were in New Jersey, we could get a glimpse of the World Trade Center. After the attacks, for days and days, we could only see smoke rising.

I took Matzi to bed that night.

In honor of Matzi’s 59th birthday and my 60th, I had an elegant suit made for him. He sits in his rocking chair, wizened by age and experience. And only by looking deeply into his glazed eyes, can one see the wear and tear of the years on his soul. I am so glad that he is still here because sometimes I believe he is the only one who understands.

I don’t know what to do with Matzi when I die. He is very frail. Like the Velveteen Rabbit, “most of his hair has been loved, he is loose in the joints and very shabby,” but I feel the need to preserve him because somehow I believe Matzi to be my only legacy.

I looked on the Internet to find a bear hospital and found one in Secaucus, NJ. There was a sign on the door: “THE DOCTOR IS IN”.

I saw lots of dolls and bears. One of the dolls was lying on a table, seemingly receiving a transfusion. The woman who welcomed me took Matzi into her arms and cradled him with such gentle admiration and respect; I felt safe about leaving him there instantly. A few days later, I received a call from the doctor who left a warm Colombian accented message on my machine asking me to return her call regarding my “beautiful” bear. When I called her back, she told me that restoring him would cost $909.50. Without hesitation, I told her to do it. For a moment, I wondered if I had lost my mind.

Several weeks later, I received a call telling me that I can pick up Matzi. The assurance and excitement in the doctor’s voice let me know that he had, indeed, been restored.

When I arrived in Secaucus, I didn’t know who was more excited, myself or the doctor. The doctor had obviously fallen in love with Matzi. She had managed to bring back Matzi’s sound box and I heard Matzi growl like I had not in many, many years. 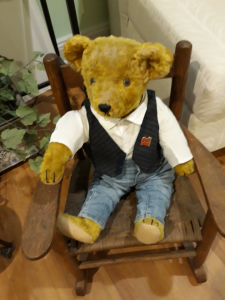 When I told the story of Matzi to the doctor, she told me she knew everything. By working with him, she learned the whole story. Matzi had carried that story, our story, with him. Matzi had been beautifully, carefully, and caringly restored and was sitting back in his rocking chair. Once in a while, our dogs will go over and take a respectful sniff knowing full well that he is not a toy but a special presence in our midst.

And my husband no longer suggests that I tell no one how much I spent on Matzi because he too now knows the story of my bear.